After finding some contradictory articles where the final result always depends on the interests behind the publisher who values ​​his emulator for having 1000% more performance than the competitors, I decided to do my own tests from a performance-only point of view, ignoring additional features since the main purpose of this comparison is to be able to advise which is the best emulator when the computer's resources are limited.

In order to be able to match as much as possible the starting point of all emulators, the configurations used were as follows :

It is important to start by analyzing the starting point to see right from the start if there is a difference.

At this point all 3 emulators have a CPU utilization of less than 1%, however, there is already a difference in RAM usage, being the winner in this case BlueStacks with a usage of only 375 MB, followed by Nox with 530 MB and lastly MEmu with 665 MB.

So in this respect BlueStacks takes the win. 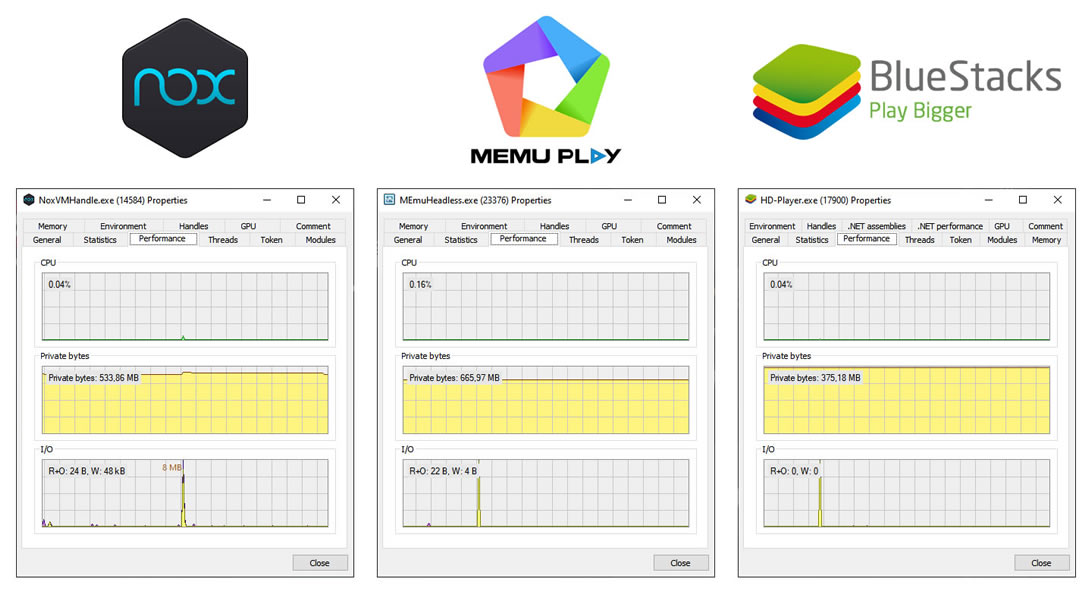 In this test the results were very close and consistent, however, despite the normal small oscillations and the difference between scores not being very large, the order of the scores has always remained the same in all tests.

In addition, during the execution of this test the baseline is reviewed in the analysis of resource usage, all 3 emulators have a similar CPU usage around 12% and a RAM usage that after subtracting the baseline also shows a similar use of approximately 100 MB. 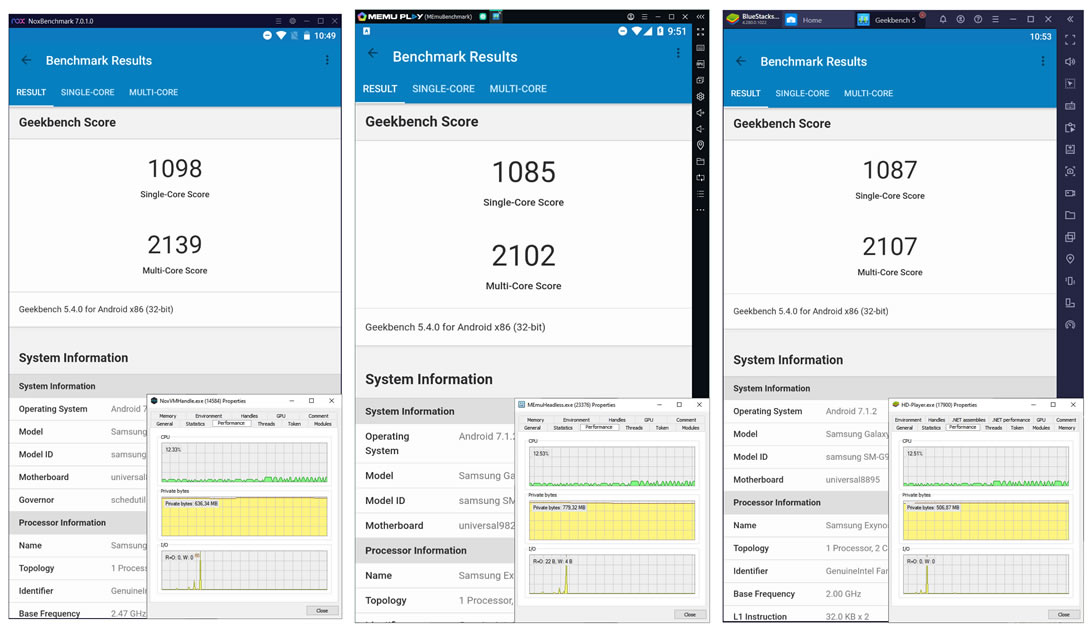 In the second test the objective is to compare the reading and writing speeds and this is the first test where we see the first very significant results.

In addition to the main objective of this test, a second factor appeared that can be translated into stability since, apparently, this test can also give errors of "insufficient memory".

Therefore, from the point of view of stability, BlueStacks come first with the presentation of this error with "very low frequency", followed by Nox with "medium frequency" and finally MEmu with "very high frequency". These types of errors can translate into instability that can cause crashes during a game.

However, in the main part of this test, Nox crushed the competition with better speeds in all fields, mainly in the sequential reading of almost 3 GB/s when the average speed of the second place is 1.4 GB/s. In this test MEmu and BlueStacks show very close results but MEmu is clearly the third place in this race. 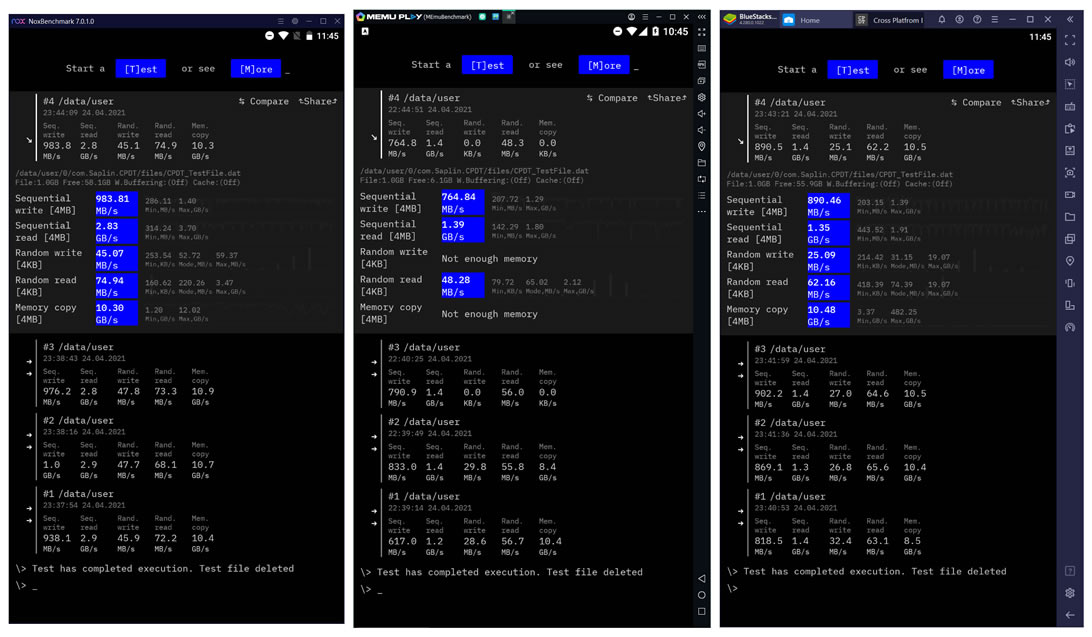 In this test, once again, Nox wins the race with a final score of approximately 16000 points followed by MEmu with around 13000 points and in last place with 0 points BlueStacks since it failed to even start the benchmark test always freezing in the startup loading. 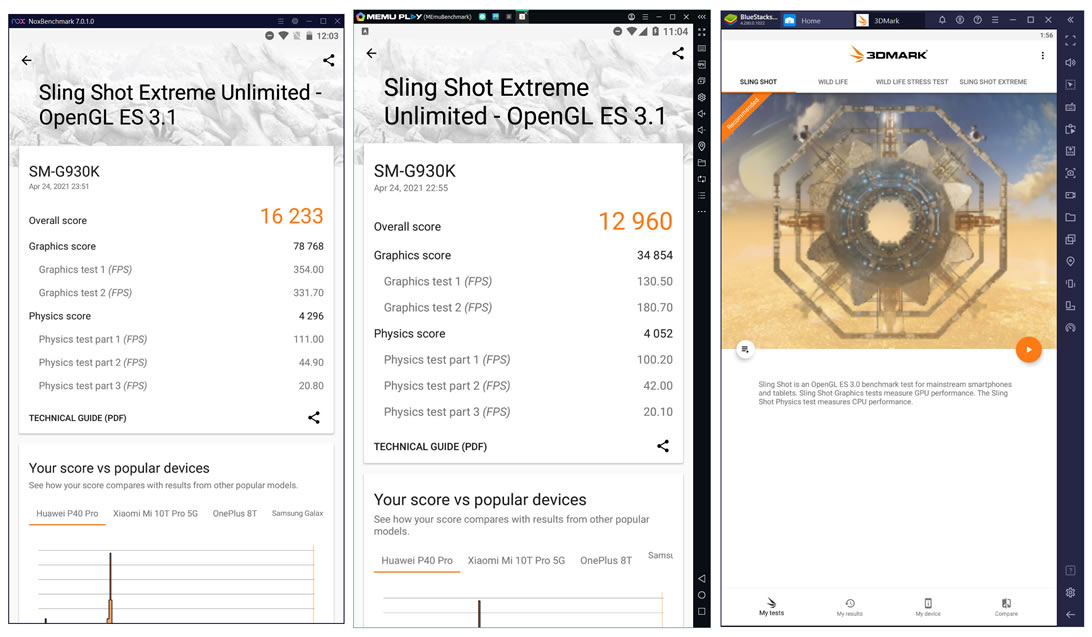 All emulators have positives and negatives and there is never a perfect emulator regardless of what their creators say, since computers are not all the same, however my advice is :